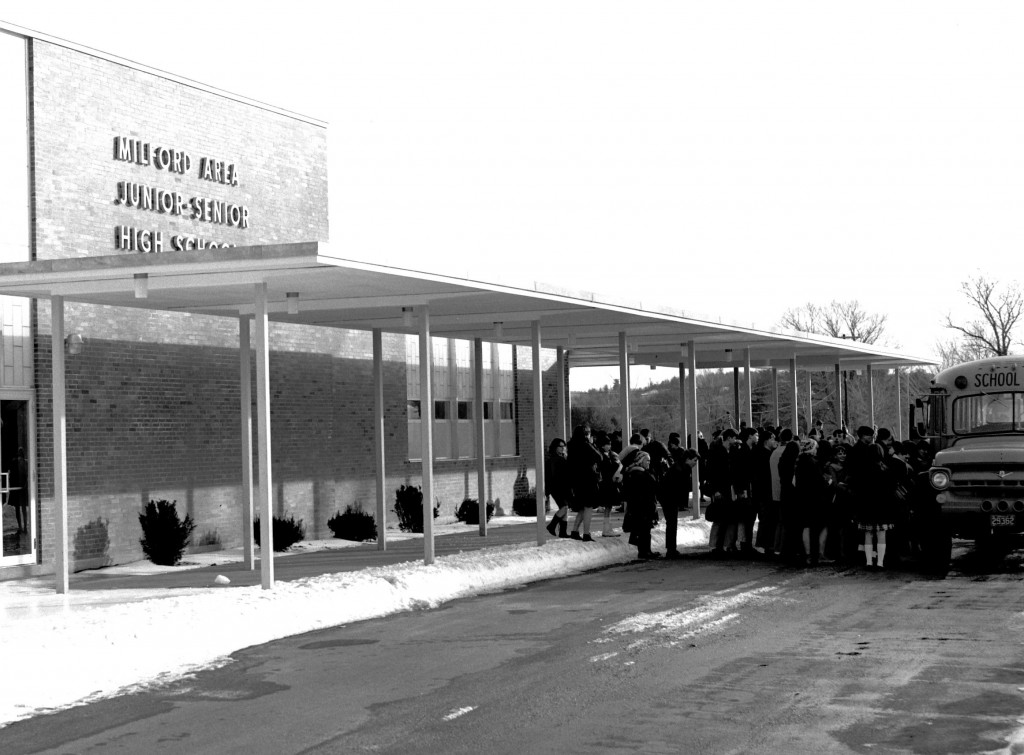 Our last story was about the Garden Street School.  For today’s picture and story, we flash back to January 31st of 1967 at Milford High School.  This photo taken by Milford’s own Bernice Blake Perry shows what looks like a bunch of kids getting on the bus at the end of the school day.  When I went to school here, the area out front of the school with the roofed structure was called the busport.  It’s where kids hung out before and after school.

As you can see in the image, the High school at that time was known as the “Milford Area Junior-Senior High School”.  This was a couple of years before what we know today as the Milford Middle School was built.  The High school housed grades 7 through 12 in 1967.  Enrollment at that time was 1094 students as can be seen in this image from the Milford Cabinet in 1967.

What was life like in Milford in 1967?  January 31st in 1967 was a Tuesday and Lyndon B. Johnson was our president at that time.  The #1 song in the country and heard on AM radio was “I’m a believer” by the Monkeys!  The average cost of a new home was around $14,000.  A new car would run you about $2,750.  Putting gas in that new car was about 33 cents a gallon.  Here in Milford, you could get flowers at Rodney Woodman Florists.  You could have dinner at the Mile Away Restaurant.  Smith and Heald wasn’t only a funeral service, but also an ambulance service.  You could buy anything for the farm, home, and garden at County Stores.  You could buy propane from Suburban Propane and you could get your automobile repaired at Medlyn Motor.  Need a job, head down to Hitchiner Manufacturing!  They are hiring a lot of people and most general help jobs start at $1.78 per hour.

The fact that all of these businesses are still here in town more than half a century later says a lot for our little town!  Please share with us your memories of Milford in 1967!