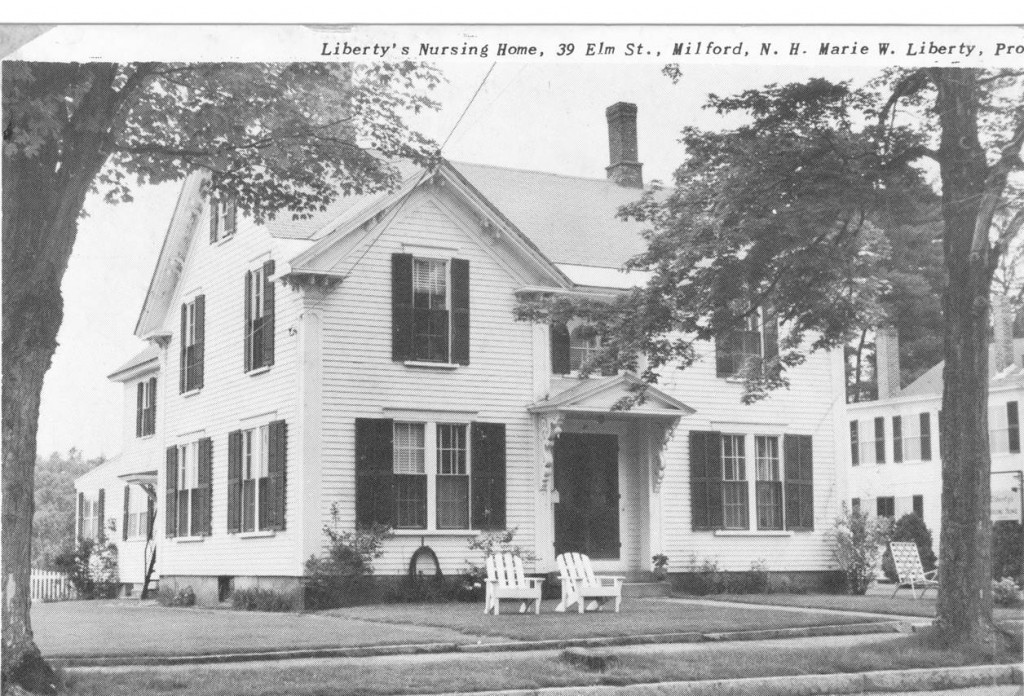 Who can remember the Liberty Nursing Home on Elm Street?  Liberty Nursing Home was located at what was then #39 Elm street.  Though the building itself is no longer there, it stood just to the West of today’s Smith & Heald Funeral Home.  Today the location is the East wing of The Elm’s nursing home.

In the Summer of 1947, Edgar and Marie Liberty owned the house next door (then #41 Elm Street and today the main building of The Elms nursing).  They purchased the home just to their East (#39 Elm).  They fixed the place up and converted it into apartments.  It was called “Liberty Apartments”.   In 1953, the Liberty’s sold their home at #41 Elm street, packed up their family and moved to Florida.  Before their move to Florida, Marie Liberty actually owned and operated the “Milford Rest Home” for a period of time at her home at #41.  When the Libertys moved back to Milford about a year later in 1954, Marie made plans for the “Liberty Nursing Home” at #39 Elm.

The Libertys owned and operated the Liberty Nursing Home at #39 Elm from 1955 until 1962, when they sold to Albert and Mabel Pohlman.

Between 1962 and 1975 when the Liberty Nursing Home closed its doors for good, it had 3 or 4 different owners, all of which kept the name “Liberty”.  We believe the last owner during the 70’s was Francis Reynolds.  We would love to find some details on exactly when it was torn down, but we suspect it was in late ’75 or early ’76 when Frank Reynolds sold the property to the Buchholz family.  It was the Buchholz family that added the 1-story brick addition to #41 Elm and extended it to #39 Elm as it stands today. Click on the images below.

Union Square in Winter of 1948