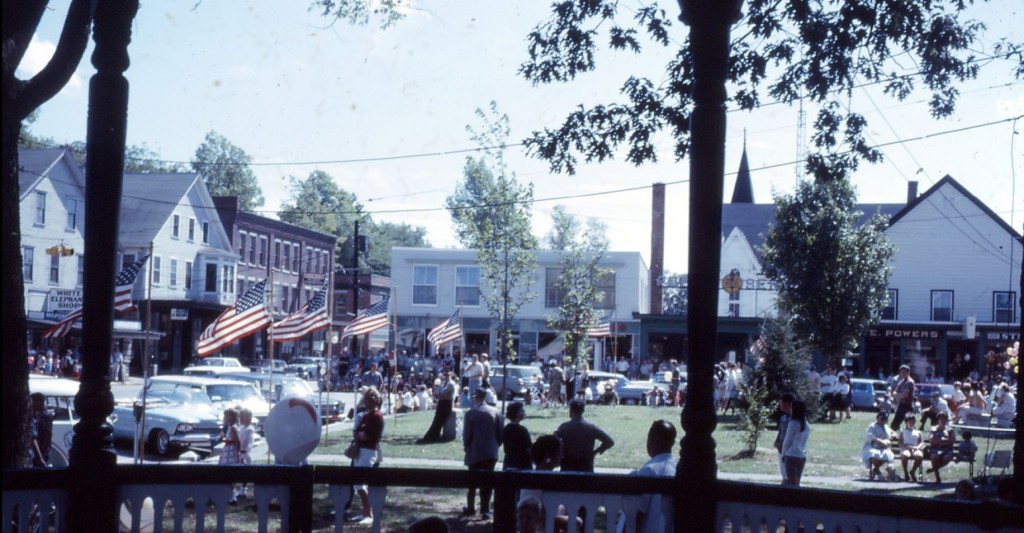 When was this picture taken?  This picture was sent to us many years ago and unfortunately, I’m not quite sure who sent it.  For me, this picture sums up what I love about our town.  This picture was likely taken some 50+ years ago in a time when Milford’s population was probably about a third of what it is today.  Though Milford was experiencing a lot of growth in those days, it was still small enough where you knew most everyone in town.  Fast-forward all those years to today.  Buildings, automobiles, and landscapes change over the years and you surely dont “know everyone in town” any more, but when we have events like our parades or Pumpkin Festival or even Christmas craft fair day, the sense of community pride, the atmosphere, and the excitement of residents coming together around the oval remains the same today!

What I don’t know about this picture is the year it was taken.  One can make educated guesses based on the automobiles, the fashions, the buildings, and the signs around town.  If I had to take a guess based on what I’ve learned about Milford’s history, I would guess 1965.  What do you think?

I could spend hours looking at the finer detail of these older photos of Milford.  On the left hand side of this picture, you can see what was known as the Milford Newsstand at the corner of South and Nashua streets.  The building that it sits in front of is the same building there today on the corner of South and Nashua streets, but note it had a pitched roof instead of the flat roof it has today.  The newsstand structure was torn down in 1969 and toady the area is back to being sidewalk.  Also note the sign on top of the newsstand..  “White Elephant Shop”.  The world famous White Elephant Shop sat where Cumberland Farms (the one closest to the oval) sits today, but burned to the ground in January of 1966.  I would have to assume that sign came down shortly after the fire.  The picture also shows that to park on the oval at one time, you had to feed a parking meter with coins.  Though I’m not sure what year the meters were removed from the oval area, I know there were still there in 1985.  At the top of the photo, you can see the once grand Baptist Church that sat where TD Bank sits today.  The Baptist Church was built back in 1874 and was torn down in 1972.

My initial thought on the year of this picture was more towards the early 60’s.  It was the Dyer block right in the middle of the picture that made me lean more towards 1965.  According to Winnie Wright’s town history from the late 70’s, the top floor of the Dyer block was removed and a flat roof was put on this building in 1965, which matches the picture.  Dyers Drug was in the west store space for decades.  In the east store space of the Dyer block was Darling’s gift shop, which I believe opened in 1962, but I really can’t tell if it exists in this picture.

To the west of Dyer Drug was Public Service of NH’s office.  They remained there until they built their newer building on Elm street in 1972.

I am not expert enough on antique cars to identify the make, model, or years of the cars you can see in this shot, but I’m sure those details could help to identify the year.  We would love to hear your memories from this picture and your thoughts on the year it was taken!