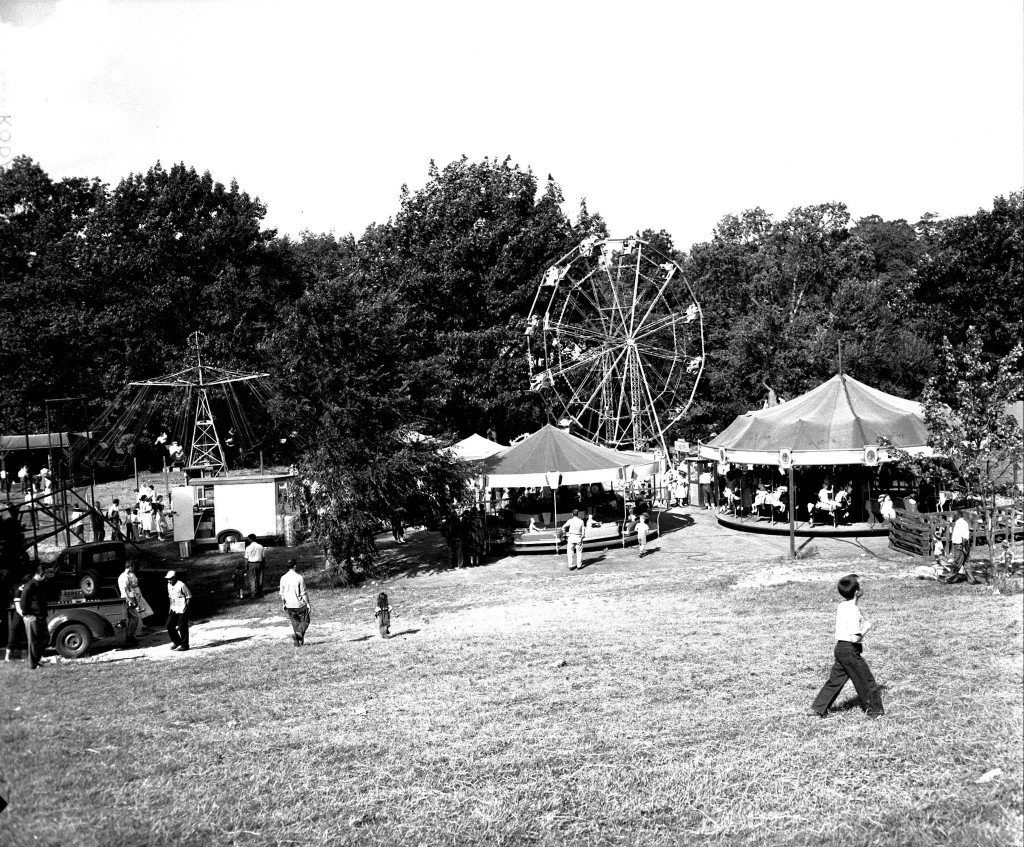 Being a kid and growing up in Milford brings back great memories.  Just little things like riding my bike to Jim’s store on Union street to buy baseball cards, sledding at Twin Tows and then walking all the way back to the center of town, hiking up to lookout rock up behind our house on Falconer Ave, etc. etc.  I could go on all day with my Milford memories.  The one event of my childhood that I often think about is the VFW’s annual Labord day parade and carnival.  The VFW still coordinates what some would say are the best parades in the state.  I would guess that I’ve only missed a few of them over the past 40 years.  My kids grew up going to the parades and I hope their kids get to enjoy the VFW parades someday.  Kids today grew up enjoying the Pumpkin Festival.  Before the days of the Pumpkin Festival, the VFW would host a great carnival every Labor Day weekend and us kids loved it!

The very first of the VFW Labor day festivities took place in 1946.  From 1946 through 1954, the festivities and carnival always took place at Endicott Park, which is a combination of where Jacques School is along with the playground out in the back.  The picture at the beginning of this article is from Endicott Park on Labor Day in 1954.  In these early days of the carnival, there were obviously rides, but other activities included novelty booths, performers, greased pig contests, and blueberry pie eating contests.  The very first year in 1946 there was a tug-o-war between the VFW and the Lions Club where each team pulled from opposing sides of the Souhegan River!  1947 featured fireworks and a doll carriage parade for the young ladies of Milford.  In time, a big event of the annual parade and carnival were Drum and Bugle Corps competitions.  In 1955, the carnival moved to Shepard park in East Milford and it was held here every Labor day for more than 30 years.  1957 featured a ‘greased pole climb’, where kids would try to climb a greased pole.  The prize was a $5 bill attached to the top of the pole!  1957 also featured “Free Tonic Time” for youngsters on Sunday afternoon.  Events during the 60’s included a “Miss VFW” beauty/talent contest, bike parades, an occasional circus, and again Drum & Bugle competitions.  In In the years when the carnival was at Shepard Park, the parade always started at the VFW on Perkins street and would go through the oval, out Nashua street, and end at Shepard Park.

My memories of the carnival are from the later years of the event..  in the early to mid-80’s.  By that time, the carnival had become a 5-day event with the carnival beginning as early as Thursday and running through Monday evening of Labor day.  As the event was always just before we went back to school, it was always great to go and see your school friends that you didn’t get to see over the Summer.  It was a weekend of catching up with everyone and having fun before having to go back to school.  I recall the VFW having a fundraiser booth setup where you could put quarters down on a board with numbers.  They would then spin a big wheel with what I seem to recall having painted dice on it.  If the wheel stopped on your number, you doubled your money.  This was probably a first introduction to gambling for many of us!  I also seem to recall my middle school wood shop and metal shop teachers (Mr. Olausen and Mr. Vital) being a couple of the guys back there running the wheel!

My final memories of the Labor Day carnival involve the event moving from Shepard park to the grounds of the American Stage Festival (today’s Boys & Girls Club).  This would have been in the mid to late 80’s.  I seem to recall it being short-lived at this new site and the carnival soon became just a memory.

Milford does have a great history of festivals and events.  For years before the VFW carnival, the American Legion held a big carnival every 4th of July.  We had the High Hopes Balloon Festival, and of course the Pumpkin Festival.  This writer is hoping that the Pumpkin Festival continues for years and years and never becomes just a memory in Milford’s history!

Corner of Clinton and Nashua Streets