In 1896 the Town of Milford realized that they needed to replace the old band stand located in the center of the oval. It was a small, round structure with an approximately three-foot high railing around it and latticed work surrounding the base. Five stairs rose up to the platform and there was no roof covering the platform. It had served the town well and the local Milford Cornet band felt it was time to build a new one.

The Band was to have a fund raiser to help pay for the structure. They were to have a picnic on July 4th of 1896 at Endicott Park (down the hill behind Jacques School) where clams would be baked in the ground and people were invited from everywhere to come and see a good baseball game. The Nashua ball team was to play against the Milford team and a “whale” of a time was planned. They felt this event would help raise enough money to start a fund for a new bandstand.

However, on the morning of July 4 it rained and the events of the day had to be postponed. By noon the sun came out, the baseball game was played and only enough money was raised to pay for the clams.

An article in the Cabinet told of the disastrous events. Mr. Pillsbury, a native and former resident of Milford and generous benefactor to the town and who lived in Massachusetts serving as their State Attorney General, read the story and wrote a letter to the Cabinet stating “go ahead and build the bandstand and send me the bill”.   Members of the Coronet band were called in – Richard Perkins and William Woods. Mr. Woods was a carpenter and drafted out the plans for a new bandstand and the plans were approved by Mr. Pillsbury. The Selectmen decided to locate the bandstand in the middle of the oval and Mr. Woods and some helpers built the structure. When the bandstand was dedicated Mr. Pillsbury came to town and took part in the festivities.

In the early 1900’s as many as 1,500 people gathered on Saturday nights for the band concerts. Horse-drawn teams vied with “honk-wagons” for a place next to the curbing to hear the concert. The Doctor Dearborn Brothers played their new gramophone with an attached megaphone as a new way of reproducing music from the bandstand until 1902.

By 1925 traffic had become so congested that the band concerts had to be held at Endicott Park. Some of the residents thought that the bandstand should even be moved to Endicott Park. However this idea did not suit most of the people and by popular demand the concerts were brought back to the oval. 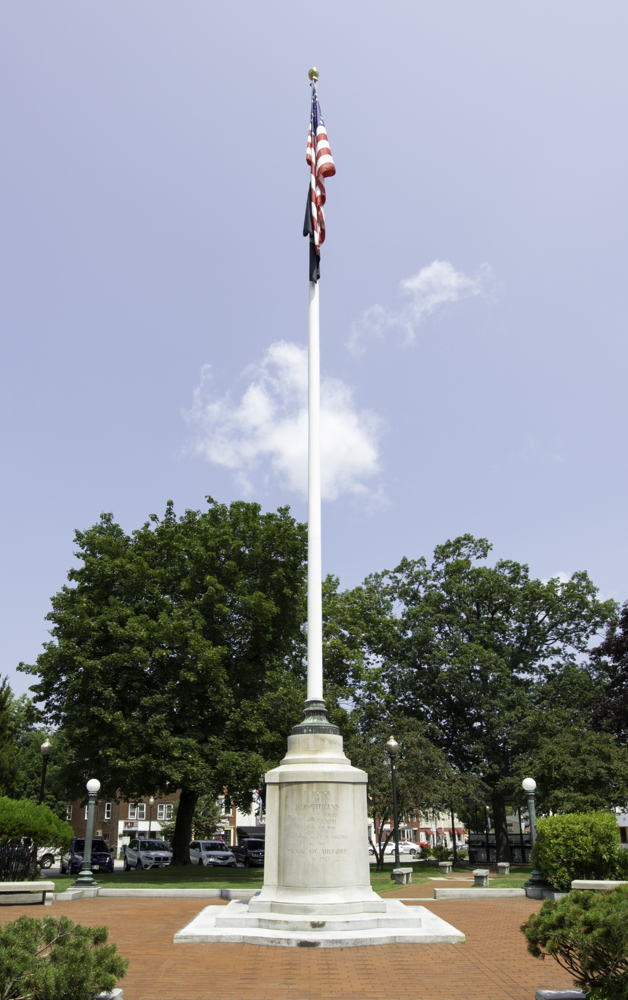 Look to the South and you will see the World War I memorial and flag pole. The year was 1927 and a very turbulent year in Milford.   This granite memorial was being constructed and the foundation work required a huge hole. The Civil War cannon weighing 3,000 pounds had to be moved to Lullwood and it was necessary to move the bandstand out of the way so it was moved to the north side of the Oval in back of the Memorial Oak. The new Memorial was dedicated on Armistice Day 1927.   We know the WWI Memorial is made of Milford granite and that it is possible the granite came from Roberts Quarry

Help save the Bandstand!

Help the Historical Society and Heritage Commission to raise funds for the renovation of our cherished Bandstand!