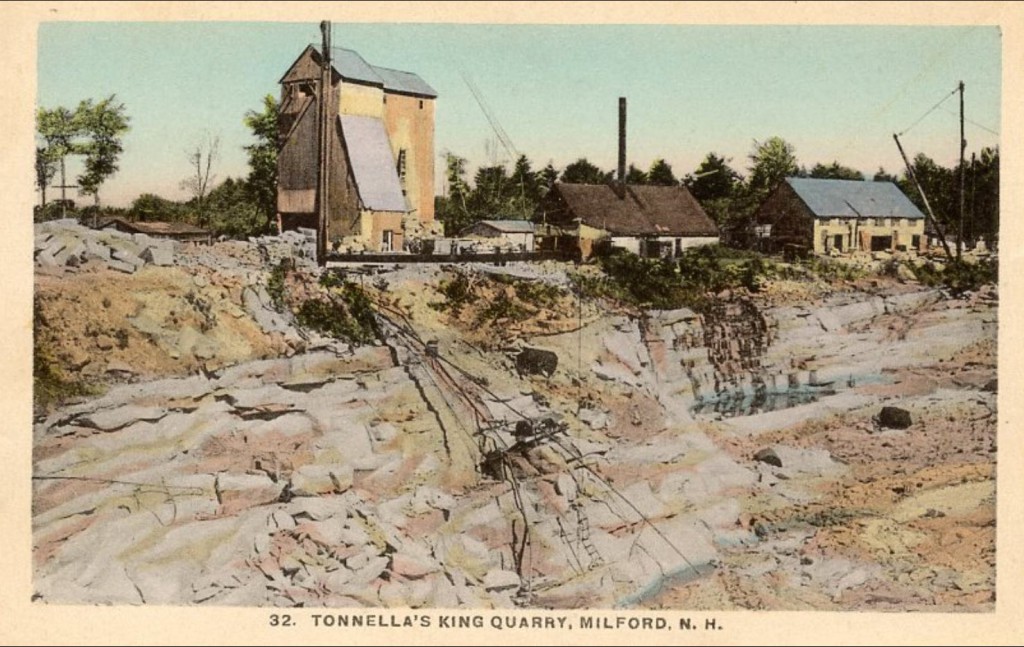 Milford has been called “The granite town of the granite state” for more than 100 years.  Milford’s granite industry was the catalyst to substantial growth in Milford, particularly on the East side of town. Though the first granite taken from the ground in Milford was as far back as 1850, the industry itself boomed between 1900 and 1930.  Joseph Tonella brought his family to Milford in 1898.  Prior to living in Milford, the family resided in Concord, NH and they came to America from Italy in the early 1880’s.  His business was called Tonella & Sons as he involved his sons, Charles and Julian.  In 1901 and 1902, Tonella purchased land on what was then the road to Brookline (today it is Old Brookline road off of Armory road) and started the “Tonella Queen Quarry”.  Driving past this location today, you would hardly know a quarry even exists.

The business of creating granite curbing, monuments, building blocks, and even crushed granite boomed and the Tonella enterprise grew by opening another quarry in East Milford in 1909.  Under the Tonellas, this quarry grew into what would become known as the “Tonella King Quarry” and is probably one of the more well-known quarries in Milford.  Being close to town and closed for years, it was used extensively as a swimming hole for more than 50 years.  Though today it is private property, it can be found at the end of Tonella road, which is right next to County Stores.

By 1913, Charles Tonella had taken over operations of the business.  He invested heavily in the operation at the King Quarry.  There was a spur rail track installed from the main line that extended south to the quarry.  Buildings were built to house cutting operations, storage, and massive pieces of equipment called ‘crushers’.  These crushers were so large that a train car could park underneath and the crushed granite could then drop into the train car.  The king quarry was about 500′ long by about 150′ wide.  After Charles Tonella died in 1929, his son, Stephen and their long-time bookkeeper, Emma Lyman continued the business for a period of time, but the wide-spread usage of cement and other building materials eventually put an end to the Tonella business.  The operation shut down in June of 1931.  Both the Queen and King quarries of the Tonella company eventually became swimming holes and hangouts for generations of Milford youth.

Today, there is still Milford granite all over town in buildings, grave stones, and sidewalk curbing, but very few historic remnants of the Tonella quarrying operations exist today.  Today’s County Stores office building just to the east of the store was built in 1913 by Charles Tonella.  Another piece of the Tonella & Sons history is the Ampitheater built a few years ago at the entrance to Keyes Field.  This was built from the remains of a stone shed that sat on Tonella Road.